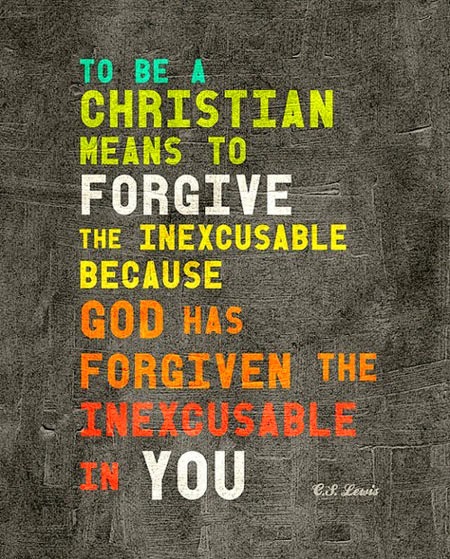 Forgiveness, this was the focus of our Sunday sermon.Even though I have read the bible many a times this particular parable has never caught my attention as it did now.
I have always felt a person is entitled to forgive or not to forgive.Many a times my thoughts have mirrored the words of the song Losing by  Tenth Avenue North.
How do you forgive people that have wronged you!
How do you forgive those that keep wronging you,without a conscience!
How do you forgive those that hurt the ones you love!
This has always been a hard concept for me to grasp even with the number of times my best friend has echoed it “Forgive”.Hurts nursed over a decade are like habits that are hard to rid.I would be a liar if I were to say I large heartedly and immediately forgave.I guess god teaches us lessons in his own good time.
I’ve been reading through Richard Wurmbrand’s “In God’s Underground”,this book is my favorite mission bible.
The many instances Mr.Wurmbrand forgave those who persecuted him,made me realize,my own hurts were nothing in comparison to him.I have never been more convicted than I have been as I read this book.
God’s stand on forgiveness is very clear.To call ourselves his followers means to have a forgiving heart.Christianity has never be easy,it has always been about the road less traveled.A Hurting family member,a hurting friend,FORGIVE! I will not tell you its easy,but I will tell you it is possible through him who strengthens us.

The Parable of the Unforgiving Servant
21 Then Peter came to Him and said, “Lord, how often shall my brother sin against me, and I forgive him? Up to seven times?”

22 Jesus said to him, “I do not say to you, up to seven times, but up to seventy times seven. 23 Therefore the kingdom of heaven is like a certain king who wanted to settle accounts with his servants. 24 And when he had begun to settle accounts, one was brought to him who owed him ten thousand talents. 25 But as he was not able to pay, his master commanded that he be sold, with his wife and children and all that he had, and that payment be made. 26 The servant therefore fell down before him, saying, ‘Master, have patience with me, and I will pay you all.’ 27 Then the master of that servant was moved with compassion, released him, and forgave him the debt.

28 “But that servant went out and found one of his fellow servants who owed him a hundred denarii; and he laid hands on him and took him by the throat, saying, ‘Pay me what you owe!’ 29 So his fellow servant fell down at his feet[a] and begged him, saying, ‘Have patience with me, and I will pay you all.’[b] 30 And he would not, but went and threw him into prison till he should pay the debt. 31 So when his fellow servants saw what had been done, they were very grieved, and came and told their master all that had been done. 32 Then his master, after he had called him, said to him, ‘You wicked servant! I forgave you all that debt because you begged me. 33 Should you not also have had compassion on your fellow servant, just as I had pity on you?’ 34 And his master was angry, and delivered him to the torturers until he should pay all that was due to him.

35 “So My heavenly Father also will do to you if each of you, from his heart, does not forgive his brother his trespasses.” (DISCLAIMER: This blog is not for profit. All images used are property of their respective companies unless stated otherwise. I do not claim ownership of this material. )