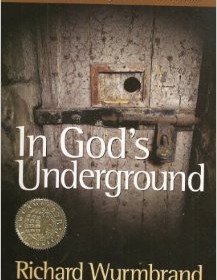 If I thought Chasing God was amazing. God wanted to take me a notch higher.I found “In Gods underground” for a dollar :).I will tell in honesty,when I completed 15% of the book, all I wanted to do was shut the book, turn the other way and never ever have to encounter this book,ever ever again.

Pst.Richard Wurmbrand was a Lutheran pastor imprisoned for his faith in Romania for 15 years under communist Rule.He was tortured,beaten,yet he never gave up on his faith for Christ.HE is also the founder of the organization ‘Voice of the Martyr’s” which helps Christians in persecuted countries.

Both him and his wife were imprisoned for their faith.His only son was left to be raised in the hand of strangers,neighbors and friends.God raised his son to be a man of faith.

Few moving excerpts from the book:

Pst Wurmbrand’s answer to the commandant who persecuted him,when he was asked to write the list of all his loved ones.
”
When he came to the end he looked at me with troubled eyes. He said, “Mr. Wurmbrand (he had never called me “Mr.” before), why do you say you love me? This is one of your Christian commandments that no one can keep. I couldn’t love someone who shut me up for years alone, who starved and beat me.” I said, “It’s not a matter of keeping a commandment. When I became a Christian it was as if I had been reborn, with a new character that was full of love. Just as only water can flow from a spring, so only love can come from a loving heart.”
”

Pst Wurmbrand’s message and Title”
His message has been, “Hate the evil systems, but love your persecutors. Love their souls, and try to win them for Christ.”
Christian leaders have called him the “Voice of the Underground Church” and “the Iron Curtain Paul.”

Pst.Wurmbrand and Sabina Wurmbrand with the murderer of her family -‘Borila’ ”

I cried, “In the name of the Lord Jesus Christ, I command the devil of hatred to go out of your soul!” Borila fell on his knees trembling, and we began to pray aloud. He knew no prayers; he simply asked again and again for forgiveness and said that he hoped and knew it would be granted. We were on our knees together for some time; then we stood up and embraced each other, and I said, “I promised to make an experiment. I shall keep my word.” I went into the other room and found my wife still sleeping calmly. She was very weak and exhausted at that time. I woke her gently and said, “There is a man here whom you must meet. We believe he has murdered your family, but he has repented, and now he is our brother.” She came out in her dressing gown and put out her arms to embrace him: then both began to weep and to kiss each other again and again. I have never seen bride and bridegroom kiss with such love and purity as this murderer and the survivor among his victims. Then, as I foretold, Sabina went to the kitchen to bring him food.

That morning Borila wanted to meet our Jewish friends and I took him to many Hebrew Christian homes. Everywhere he told his story, and he was received as the returning prodigal son. Then, with a New Testament which I gave him, he went to join his regiment in another town.

In the morning we were moved back together into another cell. Among the prisoners, I found Grigore, who was also a war criminal responsible for massacring Jews. He knew Borila. I told Gaston, “There’s an epilogue to the story of the man who killed my wife’s family. This man can tell you it.” Grigore explained how he had served with Borila in Transmistria, where they had massacred the Jews. “When we went to Russia again, he was a changed man,” he said. “We couldn’t understand it. He put aside his weapons and instead of taking lives, he saved them. He volunteered to rescue the wounded under fire, and in the end he saved his officer.”

The power of god’s love that transforms even the hardest of hearts.

This book is an emotional book for me,in many levels,I have cried with and for Pst.Wurmbrand.This book will not leave you the way it found you,it will change you.
Its a book full of wisdom on what happens when life is not full of blessings.It focuses on serving god from the dark corner and trusting him even when you cant see the light at the end of the tunnel.A beautiful insightful book on true meaning of following Jesus Christ.

As a mom here are my takeaways we can serve god no matter where we are.
When life is full of unpleasantries will our faith still be rooted firmly in him.
We may never know who we can make an on impact on.
Our life is the one people see that will bring them to god.
God can use even our bad circumstances for his glory if we let him.

(Disclaimer:the image in this post belongs to their respective company)